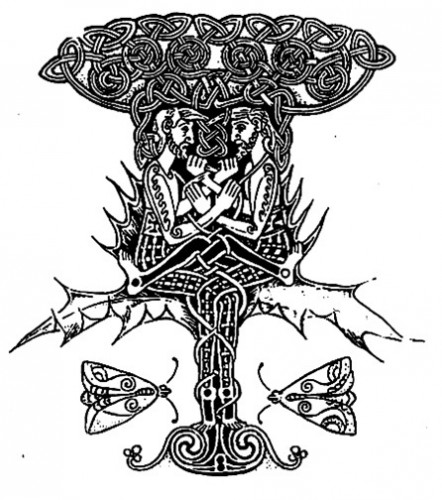 The two beard pullers contemplating the knots of eternity - a recurrent image in the book of Kells - are using a technique of paired meditation. An apt illustration - but  to redress any unintended impression that our findings may  only have relevance to bearded ones, we have used ‘she’ as the personal pronoun in the following account.

This booklet evolved out of a co-operative inquiry (1997/1998) entitled: "Towards an Integration of Counselling, Clienting and Meditation"

Our essential proposition was "Meditation and Co-counselling can be usefully combined in a single session" and during the course of six months of research - 4 days spent working intensively as a group as well as our individual explorations between meetings - we began to feel we were involved in developing a new method of dyad work which we call CO-MED.

As a practical outcome of the inquiry we wish to make our findings and recommendations available to the Co-counselling community and to the wider community of seekers and healers and we hope that this booklet can serve as a starting point for further exploration and development of the CO-MED method.

The word CO-MED is a contraction/combination of Co-counselling and Meditation. It also carries a message of 'meditating with or together'.

The CO-MED method, in working towards an integration of Co-counselling principles and (Insight) meditation principles is a dynamic interplay between two very different ways of being with feelings and/or mind-states. In Co-counselling there is an emphasis on moving on - be it a deliberate intensification or a cathartic discharge of feeling - and an active, purposeful exploration of connections and causes. In (Insight) Meditation the emphasis is on a sharp, in the moment awareness of the ever changing process of mind-states- watching thought, sensation and feeling arise and pass away without 'following up' the original thought/feeling/sensation with a reactive curiosity or repressive avoidance. Crudely put, Co-counselling requires an active 'identifying with', Meditation an aware 'disidentification from.'

CO-MED, by first setting the intention to combine these two ways of being, then extends the principle of 'client in charge' and 'setting the contract' to include choices about when to simply 'be with' and when to 'be working on' the contents of awareness.

Insight Meditation: A broad term to include all forms of meditation which use Mindful Awareness a.k.a. Vipassana, Shamata, Zazen, Choiceless Awareness.

Concentration Meditation: The other broad category of meditation, would include the chanting of mantras, visualisation practices, the movement of inner energies, worship, prayer etc. These practices would not lend themselves to CO-MED. in the same way. We have, however, experimented with metta bhavana - (a practice of concentrating upon and generating feelings of loving kindness) - this was in the context of asking the counsellor, rather than the client, to do this practice - see below)

Setting the Intention: Towards the end of our group's work together we realised that we were benefiting from the cumulative effect of working in this way and considered how a new group or pair might reach this point more directly. We strongly recommend the following 'opening routine' which, from a secular point of view could be thought of as a practice of setting intention and attunement. For the more spiritually inclined it might be considered as a ritual for opening sacred space.

After the contract has been set (see later) partners enter into a period of mutual gaze which is brought to a close with a spontaneous NAMASTE - the hands are brought together at the heart and partners bow simultaneously, not only interpersonally to each other, but also, transpersonally, to salute the transcended self which belongs to neither but is the province of both. The first phase of the work then begins and on completion of the last phase the ritual is repeated.

(The tendency to flit focus between one eye to the other can be obviated by gazing at the triangle formed by the eyes and the brow.)

In the same way that a hug ends spontaneously with one partner giving a little extra squeeze which is immediately reciprocated, gaze comes to a close when the first partner begins to raise hands to the chest. It's perhaps an indication of effective attunement when it becomes difficult to discern which partner initiated the Namaste.

Setting the contract: In addition to the usual: who goes first, choice between free attention, normal or intensive interventions, 5 min warning or whatever, it is in the contracting that the client designs the kind of integration she wants.

In the first, the sandwich, periods of clienting and meditation are clearly timed and sequenced. If partners agree to a symmetrical structure, then a central meditation period can serve to finish client 1 and start client 2 ie. (med), (client 1), (med), (client 2), (med). No attention switching is necessary in this model, this will take place spontaneously in meditation. (See the table in the appendix for suggestions of ways to structure different time periods).

Generally, a period of meditation can be used differently according to whether you are preparing to counsel or to client. If she is to be counselling next, the meditator will be preparing to deliver her free attention/normal contract etc. with the same attention to detail and devotion to task that she is presently developing in her meditation. If she is preparing to client the meditator will be observing the flow of body/mind events - noting, perhaps, recurring themes or preoccupations in readiness for her forthcoming client work. Depending on the extent to which the client is prepared to truly work with 'what's on top', quite unexpected and previously unexplored directions for client work can emerge in this way.

And counsellor and client may not always be meditating at the same time. Two alternatives which we explored were:

a) whilst client meditates, counsellor does metta bhavana (projecting feelings of loving kindness towards client - a kind of concentration meditation)

b) whilst client meditates, counsellor uses her intuition combined with any discernible client cues to detect when client drifts away from mindful awareness and to bring client back with touch on her hand or soft verbal reminder.

Dynamic Integration: This is a more subtle, unstructured process. (It emerged in the later stages of our research and we recommend would be CO-MED'ers to become familiar with the sandwich style of integration first.)

From within a period of inner observation- of the arising and passing away of mind/body phenomena- the client chooses an object upon which to work and begins to develop it into an issue through normal co-counselling dialogue to the point at which some sense of completion is achieved - either through cathartic discharge, celebration, commitment or direction - whereupon she re-enters a period of meditative inner observation, allowing insights to settle into place.

She continues to watch the 'flotsam and jetsam' of experience until another 'item' holds her attention sufficiently to become the next object to work upon. This cycle is repeated to fill the client time available. Much can be learned in this way, not only from the insights gleaned from working with the objects chosen, but also, by examining and adjusting one's selection criteria. She may also experience an unusual state of consciousness by ‘balancing on the knife edge’ between ‘experiencing’ experience and ‘working with’ an experience.

The least structured integration: This only emerged during the final day of our work together. It was not properly researched, but is mentioned as a pointer to future inquiries.

To simply state a very complex and subtle process: Both partners meditate together until one spontaneously breaks into expressive clienting whereupon the other adopts the role of counsellor. (Alternatively, one may intuitively feel that it is time to shift from meditation into giving free attention to the other person.) The process continues in the cyclical manner described above with the difference that either person can client next. The partners will need to be well attuned to each other; turn taking might be agreed upon beforehand to help guard against any compromise of peer reciprocity.

AND - combinations of the above are obviously possible - for example, one might choose a sandwich integration with a dynamic integration in the clienting phase.

To summarise, in different words:

Find ways to remind yourself/selves of the fact that you and everyone/thing else is an infinite being - the unbounded universe. (your Buddha-nature cannot be achieved, only realised - it’s who you always really are) - find a way to express this verbally or non-verbally. Eg.. saying or enacting ‘Namaste’, bowing, silent eye-contact, holding hands, breathing deeply together, embracing, saying prayers, chanting, lighting candles/incense etc.

Whatever the contract, make room (allow) for:

A Few words on Group Practice

We are writing about an experience which happened mostly in a group context. The principle bit of practical advice we have to offer is: - design it so that your session contracts are synchronised - ie, so that all pairs are sitting in meditation at the same time! In marathon CO-MEDS, if partnerships and ordering is worked out at the beginning of the day, a powerful working atmosphere is generated by bringing everyone back for Group meditation at each partner change.

Group member’s competency: We are assuming that most people whose interest has lead them to read so far will already be familiar with both a form of Co-counselling and a form of Insight meditation practice. Here are a few contact people/organisations for further development of individual competencies.

a) Equal Med and Co

b) More Co than Med

Where Coco A+B, Coco B+A signify ordinary turn taking Co-counselling and Coco ABBA suggests time spent exploring that least structured integration which we refer to above. Remembering, too, that client time can be straight co-counseling; and it could also be used to explore the dynamic integration.